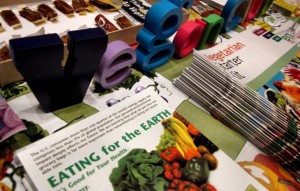 I am continually impressed with the vegan club at the University of Texas at Arlington. So while I’m proud of their work on Resolution 11-19, I’m not at all surprised at it.

Resolution 11-19 asks for better labeling of ingredients and vegan options in the cafeteria and for more and more varied healthy vegan options. The National Restaurant Association estimates that about twenty percent of university students are vegetarian, and it’s likely that that figure is even higher at UTA because of the large number of international students from countries where vegetarianism is more common.

In working on this resolution, the vegan club sought opinions and support from other university organizations such as the Indian Students Organization, the Environmental Society, and several nursing groups. It’s just this kind of networking and energy that makes the group so successful.

Congrats to the Vegan Club on the passage of Resolution 11-19! The future of Texas looks bright.