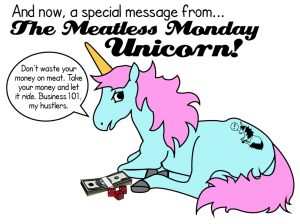 It’s SXSW panel voting time, and there are a number of vegan-related panels you should support.

First up, Austin’s own Lazy Smurf is teaming up with Laura Beck of Vegansaurus and Jezebel to talk about stereotype-smashing vegan activism like Thug Kitchen, the LA Vegan Beer Fest, and Vegansaurus’s Meatless Monday Unicorn in a panel called Activism on the Internet: You’re Doing it Wrong. The team will explore how social media plays a role in both forming and challenging these positive and fun forms of activism.

I’m not going to tell you to vote for this last one, but it is of interest to a vegan audience despite being decidedly unvegan. Hacking Meat: Why Insects Are the Future of Food. Again, eating insects, not vegan. But it’s an interesting idea to explore in order to reduce consumption of animals that have more of a capacity for pain and emotion. Personally, I think it’s much easier to get people to eat beans and grains than to eat bugs, but I like exploring ideas that address the problem that we’re consuming an unsustainable amount of meat.