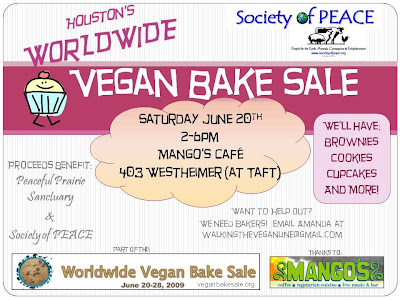 Join us for Houston’s Worldwide Vegan Bakesale on June 20th from 2-6pm at Mango’s Vegetarian Cafe in Montrose (403 Westheimer at Taft). Click here to view and print our flyer to share with others. Hope to see you there!

We invite you to join us for our upcoming March Movie Night & Vegan Bake Sale! In support of “Meatout Week 2009“, we’re hosting a free public screening of the award-winning Tribe of Heart documentary PEACEABLE KINGDOM. Our event will be held at St. Stephens Pecore Hall in Houston on March 20th — the first day of Spring!

A vegan bake sale will also be held in conjunction with this event to help raise funds for our ongoing outreach. We’ll have plenty of delicious vegan sweets, plus “veggie dogs” with all the fixins & refreshments. Our outreach table will have lots of great information and volunteer forms will be available for those who are interested. If you wish to donate vegan baked goods for our fundraiser, please let us know! All donations will benefit Society of PEACE.

Pecore Hall at St. Stephens is located at 1805 W. Alabama in Houston (near the Havens Center). The entrance is by the parking area at Sul Ross Street & Woodhead. For a map, click here. You can also download, print & share the event flyer below. The event is open to the public and we encourage you to bring guests!

RSVP’s are requested for seating and greatly appreciated! You can RSVP online or send us an email if you plan to attend. You may also call/text the Society of PEACE line at 832-722-1376.

Vegan pizza in Houston!
Crossposted from Walking the Vegan Line

To celebrate the new year, we joined some good friends for dinner at Houston’s new “green” restaurant, Pizza Fusion. Well, calling it Houston is kind of a stretch since we had to drive 40 minutes to get there (which, I know, isn’t very green to drive that far for dinner), leaving the 610 loop which we rarely venture outside of. Pizza Fusion is a restaurant chain that prides itself on minimizing their ecological footprint through the use of organic ingredients, hybrid delivery vehicles, reclaimed building materials (the floors and tables in this one were from the basketball court of a local high school), LEED certification, and recycling. All good things if you ask me! Of course, the fact that they have a vegan cheese option as well as a vegan dessert, also helped lure me outside the loop.

It was kind of surreal to see the word “vegan” emblazed on a building in the suburbs of Houston. If that’s not progress, I don’t know what else is. After some confusion over volumetric conversions with the bartender (the 16oz glass of beer came marked in a 0.4L glass, which is equivalent to about 13.5 oz, but we were still charged for the 16oz), our vegan breadstick order arrived with a mix of both white and multigrain minis and a marinara dipping sauce. We probably would have ordered two if we knew our pizzas would take almost an hour to arrive…. But arrive eventually they did. Two specialty pizzas, a veggie medley (mushrooms, broccoli, bell pepper, onions) and a Seattle (onion, garlic, basil, balsamic vinegar, and artichoke hearts) both with FYH mozzarella on a crispy white dough crust. The Seattle was my favorite with the bite of the vinegar, the sweetness of the onion, and the creaminess of the melty “cheese”, all the flavors melded into a perfect pairing. The pizza was definitely a hit with the vegan and non-vegan parties at our table. To make up for the very slow service, the manager gave us a few freebies… “I’m a vegan” bracelets, coupons for soy cheese pizzas, and dessert! This vegan, gluten-free brownie was a nice ending to the meal. Not as good as my homemade brownies (they were a little grainy and could have been more chocolatey), but still good. While I enjoyed out trip out to the boonies for a vegan pizza, it’s not likely a trip I’ll make very often. Luckily, Pizza Fusion has plans to open more locations throughout Texas and the country. Maybe one will be opening close to you (and me)!