Action for Animals is hosting a rally against Ringling Bros Circus tonight in protest of animal abuse. Ringling Bros has been cited by the USDA for sick and injured animals. Animals are routinely beaten, shocked, dragged, and chained as part of their circus training. Come to the rally tonight to show that this is not acceptable. The rally will be at the Erwin center from 6 to 7:30 PM. More information can be found on the Facebook page.

There are two new groups forming this summer for veg-interested people in Texas. The first is a social meet-up group for San Angelo vegetarian and vegan folks. It’s just forming, so this is an opportunity to have a big voice in shaping the group.

The second, Animal Rights and Rescue of North Texas, is a group focused on providing immediate care for animals in need in North Texas, both wild and domesticated. North Texan blogger Veganacious is one of the founders. Veganacious was inspired to create the group both because of increasing animal need due to the economy and also because of the bitter irony that most animal protection groups have activities that feature meat. (I had no idea Veganacious was Texan!) There’s an abolitionist bent to the group, but they say all people interested in helping animals are welcome. ARRNT has a meetup group and Facebook page.

Both of these groups have been added to our Veg Groups pages. As always, I’d love to hear about any new or existing veg groups in Texas. Drop me a line at lonestarplate (at) gmail (dot) com.

I really hate to write about this, but I don’t think it’s something I can leave unsaid. Mercy for Animals has done another undercover animal investigation, this time of a calf farm that raises animals for use in dairy farms. The farm is in Hart, Texas, between Lubbock and Amarillo. The video they released yesterday is horrifying. I was only able to watch the first few seconds of it, and even that haunted me all last night.

According to Mercy for Animals, the video shows workers
MFA has turned their evidence over to local law enforcement, but how many other similar farms are there out there without undercover investigators documenting cruelty like this?
The video is here on MFA’s website. It plays immediately when you click on it.

This is a great year to be vegan at Austin’s South by Southwest. For those of you who know as little about music as I do, South by Southwest is a huge music festival. Huge. Hundreds of bands from all across the world will be in Austin from March 15 through March 20. And thousands of industry people and fans. Over the years, the festival has grown to include films, media presentations, and panels. For the week of the festival, Austin is dominated by all things music, film, and technology.

One of this year’s panels will feature Lone Star Plate’s own Lazy Smurf talking about vegan activism through blogging. She’ll be joined by Laura Beck from Vegansaurus. They’ll discuss how to spread the vegan message and create community through blogging. Monday, March 14, 3:30 PM, Austin Convention Center, Room 5ABC, 500 E. Cesar Chavez St.
The South by Southwest fun spills over into numerous outside events, including a Compassion Over Killing table with Vegetarian Starter Guides and Easy Vegan Recipe booklets at a to be announced music venue. What goes with vegan pamphlets better than vegan baked goods? The table will also feature a vegan bake sale. COK is still looking for volunteer bakers and people to table. Information about signing up can be found on COK’s website here. Saturday, March 19, noon to 6 PM. Venue TBA.
And finally, Lazy Smurf has the scoop on all the best places to get vegan eats near South by Southwest in her updated vegan guide to SXSW. Breakfast tacos (an Austin institution), food carts, Tex-Mex, late night dining, and the best grab-and-go options.

If you’re looking to adopt cat, or know someone who might be, please see my recent post about cats at Town Lake Animal Shelter. These cats have a day or two to go before facing euthanasia. Heartbreaking. 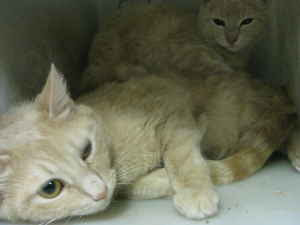 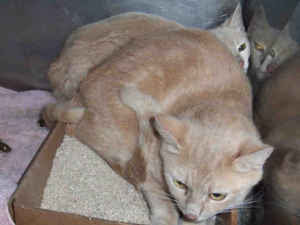 
Tonight will be the last night of fear and uncertainty for Aggie and Feather — if these young, very soft and beautiful cats don’t find someone to rescue or adopt them.

Feather is a teenage mom – she apparently had kittens but was left at the shelter without them. She is sweet, gentle, and shy right now, but loves being petted and rolls over for more attention once she trusts you. She is probably less than a year old.

These girls are divinely beautiful cream tabby shorthair cats, who need a place to feel safe, secure, and loved. If you want to give them a new home and the bright future they deserve, please act today.

If you visit TLAC today, meet the cats, and express an interest, that interest can save their lives.

You can see them on the TLAC web page – make sure you look at “All” animals under “Adoption.”

I just saw on News 8 Austin that 14 cats were dropped off at the Town Lake Animal Shelter today, from a single owner who can no longer take care of them. They currently have colds, but are healthy and ready to adopt. If they are not adopted by Friday, they will be killed on Saturday morning.

I recently adopted a lovely, lovely cat from the Town Lake Animal Shelter, and I highly recommend you check these cats out if you’re considering adopting one. Read my post about it here.

Search for a cat or dog here.

MacKaye is the founder of the Dischord record label, former band member of Fugazi, and currently a member of The Evens. The event is sponsored by the Center for Ethics and Leadership, Student Life, and the Digital MBA Program. The event is free but ticket is required. Contact Kate Rosati.