All their beans are vegetarian, as is the rice, which makes dining hear a pleasantly worry-free – if a little bland – experience. They have really good, warm, greasy chips and tasty salsa, and their margaritas are strong and cheap.

Okay, so this is more New Mexico Mex, but…

I’ve blogged about them before: Desert Gardens mixes are fantastic. Most of the items in their line are vegan, they contain recognizable, natural ingredients, and the handy little packets have simple, step-by-step instructions that are easy to veganize. For the Red Enchilada Stew, I used pan-fried Soy Curls (thanks, Alin!) in place of the chicken, and for the Green Chile Cornbread, the only necessary alteration was replacing one egg (I used a water, oil, and baking powder mixture that worked beautifully).

I added a little bit of my own Fieldmarshal’s Basic Tex-Mex Enchilada Sauce, as the my sauce (following the Wasabimon recipe) seemed a bit too salsa-like, all chunky and relish-like, and enchiladas need some saucy glue to hold things together. So I used my basic sauce to roll the tortillas, poured the unused spoonful over the top, and then decorated the whole thing with the onion-based sauce, which I made liberal changes to, based on available ingredients.

I served this up with black beans and a big dollop of Sour Supreme. It was pretty tasty; potatoes make an excellent vegan enchilada filling, and the chard added color and texture while packing a heathly punch. I think next time I might try a variation of my sauce, with a little queso and Sour Supreme mixed in, and a garnish of additional, barely-steamed greens.

The first time I went to Polvo’s, in 1999, I wasn’t impressed. I ate meat then, and I am sure I had some sort of chili con carne cheese enchilada dish, but I remember thinking that the tortilla chips sucked, the sponge-painted walls sucked (I hate sponge-painted walls, but they’re a much worse offense in an Italian restaurant), the wait sucked, and the food was kind of bland.

Though I still agree with that initial assessment, I now love Polvo’s. Yeah, it’s a paradox.

When I came back to Austin in 2006 as a vegetarian, I discovered the cheese enchiladas with poblano cream sauce, and I was converted. I also realized that the availability of three distinct salsas was pretty cool (I like the dark, smoky one). I also determined that, with proper planning, getting a spot on the crowded patio after work or on a Sunday morning was worth waiting for, especially once I figured out that they have vegetarian rice and beans, and several different acceptable breakfast taco fillings. This past September, a bunch of us spent a lovely, long morning there before heading to ACL, and everyone – vegans to omnis – was happy. The margaritas ain’t bad, either.

So let’s talk about this vegetarian rice. To be honest, I don’t know if I believe them. But they advertise vegeterian rice, and every time I ask the waiter about the contents of the beans and rice, they tell me they’re vegetarian. I like the refried black beans at Curra’s better than the whole beans with tomatoes (ew) served up at Polvo’s, but the rice at Curra’s? No thanks. The rice at Polvo’s, on the other hand, is what one expects alongside enchiladas: it’s yellow, it’s sticky, it’s richly flavored! Yes!

Unfortunately, their guacamole, while served in ridiculously huge helpings alongside chopped cilantro, tomatoes, lettuce, and green peppers, is rather bland. Maybe it’s because it’s straight-up avocado, I don’t know – but I expect my guacamole to have a depth of flavor. It needs chili powder, cumin, lime juice, garlic, onions, and salt – yes, salt! Even El Chico slices the avocados right in front of you and tosses them with the requisite secondary ingredients in a fake mocajete.

Today at Polvo’s, I ordered the poblana enchiladas with “tamatillo” (physalis ixocarpa – is this different from “tomatillo,” physalis philadelphica?) sauce. They also have some other vegan sauces, such as verde, roja, and chipotle, and a choice of grilled vegetable filling. The menu, I noticed, advertises two potentially vegan tamales, too: vegetable and bean. They also serve huge burritos. These enchiladas were pretty damn tasty – and moist, like enchiladas are supposed to be (unlike at some other places that will remain nameless). There was so much that even I, consummate enchilada devourer that I am, could barely eat half of what was presented.

Thanks for lunch, Mike! 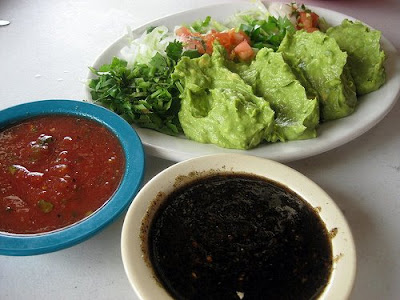 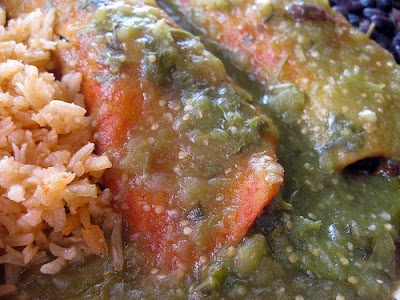 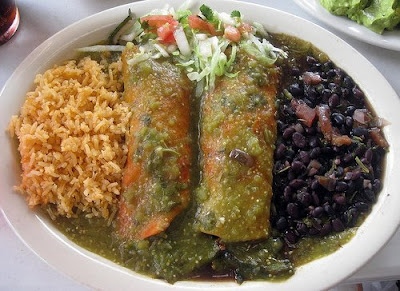 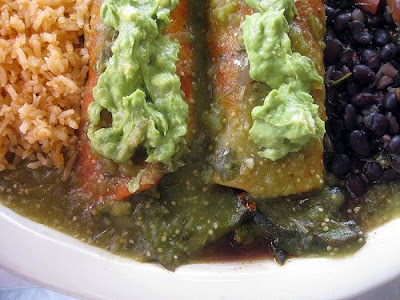 It’s a tough job, but someone’s got to do it. I’ve spent the last eight months on a quest to try as many vegan enchiladas as possible, and here are the results.

Plenty of Austin publications routinely print lists of the best and most popular (which aren’t always the same thing) Mexican and Tex-Mex restaurants in town. When was the last time anyone bothered to ask vegans?

Right, right – the words “vegan” and “enchilada” are mutually exclusive. After all, vegans don’t want enchiladas con carne, or with sour cream sauce, or even with cheese. But being vegan does not preclude being a hungry Texan, and for lucky Austinites, the options are perhaps shockingly numerous.