Here’s the second post in our Meet a Vegan Texan series. Sergio hails from DFW, and he has a pretty positive attitude about being vegan in Cow Town. I want to steal his awesome friend and a plate of veganchiladas, too. 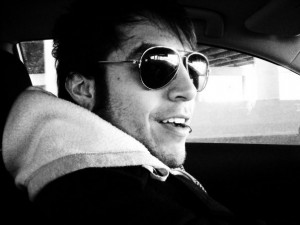 First name and city/region: Sergio, hailing from Dallas/Fort Worth

Why are you vegan? I went vegan mainly for ethical and environmental reasons. I’ve almost always had some kind of pet (the most at once was two dogs, three guinea pigs, and a betta!) and always treated them like members of my family. As far as dogs go, I always adopt from either a shelter or a rescue association. It’s safe to say I really care for our four-legged and finned friends. And I’m a green nut as well. I’m constantly picking through the trash at my work’s break room for discarded bottles and try to walk wherever I can so it just made sense that I follow a diet that in more in line with those beliefs.

How long have you been vegan? I went vegan at some point in April 2008. I don’t remember exactly when because it was kind of a spur of the moment type thing. I was mulling going vegetarian (I went veg for a couple of years before) again and then up and decided to go straight vegan.

What’s it like to be vegan where you live? I get a lot of weird looks. A lot of people ask if it’s some type of diet or religious thing. I can’t tell you how many times I’ve heard, “I couldn’t live without cheese!” I’m lucky in that I’ve got a handful of all-vegan restaurants in the area but comparing here and a place like Austin is night and day. I went to a wedding in Austin recently and my father-in-law went to a pizza place and told them he needed a vegan pizza and they knew exactly what to make. I got a pizza here the other day and ordered it without cheese and when I picked it out, the employee commented how that was unusual. I mean, when you live near a city that’s nicknamed “Cow Town,” everyone sort of expects everyone else to eat meat.

What’s your favorite resource for finding vegan food? Your favorite vegan restaurant dish? I go to vegweb.com a lot but I usually get my recipes from a good friend who has been vegan for nearly a decade now. He’s a much better cook than me so I usually just poach from him. As far as favorite dish, it’d have to be either the Mitch Tofu from Spiral Diner or the now discontinued Blazin’ Noodles with tofu and veggies from Pei Wei.

What’s your favorite vegan Texan food? Well, this is technically Tex-Mex I guess but I make the dopest veganchiladas. I made them from scratch one day using a recipe I found online as a loose guide and they ended up incredible. My friend who is a staunch meat-eater had them and texted me the next day and said, “Man, I could really go for some of your hippie enchiladas.”

Do you have a secret vegan weapon? Laser vision? Kale? A larabar in your pocket? I would have to say nutritional yeast. It adds so much to a wide variety of recipes, I couldn’t imagine having a kitchen with a supply of that delicious yellow powder.

If you could only choose one, would it be tofu, tempeh, seitan, or beans? Oh, man, that’s tough. Seitan is out simply because I don’t eat a lot of it to begin with. Then tempeh even though there is an excellent tempeh/Frank’s Red Hot sandwich recipe I found online that is an amazing picnic food. I’m trying to cut back on the tofu to limit my soy intake but man, I have gotten good at cooking it. But I couldn’t live without beans. Black beans are so versatile. Plus I could still eat burritos which are definitely my favorite food.

What advice do you have for people in your area about being vegan? The best advice I ever got about being vegan was from the aforementioned friend. I was a few months into it and I was craving something meaty I’m sure and called him for support. He said, “Don’t think about what you can’t eat. Think about all the awesome stuff you CAN eat.” Sage advice, really. DFW-specifically, there is Spiral Diner and Loving Hut plus a ton of awesome Thai restaurants. A little bit of legwork goes a long way in figuring out where you can eat. Of course, if you’re all thumbs in the kitchen like me, a cooking class would be a good move.

If you’d like to answer the Meet a Vegan Texan questionnaire, send me an email at lonestarplate (at) gmail (dot) com.

I was thrilled when I heard that a Loving Hut opened in Arlington, Texas. I grew up in Arlington. It’s full of chain restaurants, and at times there wasn’t even a single independent coffee shop. So a completely vegan restaurant (albeit a chain) opening was a huge deal.

Last time I visited my parents we stopped by. Loving Hut has an interesting business model. It’s a chain of restaurants created by Supreme Master Ching Hai. According to their U.S. website:


Loving Hut is created with a vision that all beings could live in peace, love and harmony with each other and the planet. Loving Hut chain restaurants are newly opening around the world. It is an invitation to gourmet cuisine made with wholesome vegan ingredients, offering an accessible starting point for those making the noble transition to a plant-based diet.

Every restaurant is individually run, so you’ll find a different menu at each one. And every restaurant also has Supreme Master TV playing at all times.

Another difference, and a really positive one, is that Loving Hut prints photos of all their menu items. This is really great for people who have never eaten seitan or other vegan specialty foods, and I think this probably helped my mother’s comfort level as well.

So overall, the food was pretty good, but not exceptional. I’m still very pleased to be able to find so many vegan choices in Arlington. And I’m looking forward to going back to check out their desserts and baked goods.