It’s bake sale time again! Vegans around the world are heating up their ovens to make tasty treats to raise awareness about veganism and funds for their favorite nonprofits for the 2012 Worldwide Vegan Bake Sale. Bake sales will take place between April 21 and April 29. There are a number of bake sales going on through out Texas (details below). If there’s not one in your community yet, then it’s up to you to organize one.

The Worldwide Vegan Bake Sale site has great advice on how to set up a bake sale in your community. I’ve done a few of these, and believe me, you can do one, too! You need a location, a table, and some other bakers to help you. It’s as easy as that! It’s still early in the month, so many of these bake sales are still in the planning stages, but I wanted to get this info out as soon as possible so more people can sign up to bake and organize.

Planning a bake sale in Texas that’s not on the list yet? Tell us about it in the comments!

Hey, you! Yeah, you there in your flip flops and pajamas. (Still? At this time of the day?) You in the small town or the vegan-unfriendliest city on the planet. There are lots of new vegan initiatives that need your participation.

We’ve talked a lot about the awesomeness of vegan bake sales on Lone Star Plate. About how they create community and share veganism on the nicest terms possible. The idea of small-scale community activism is taking off. Read on for what you can do to spread a little vegan love around your community.

The first new movement is the vegan bake sale shrunk down to the size of your kitchen. Or something. Gary of Worldwide Vegan Bake Sale wants you to bake or cook something tasty and vegan for your neighbor. And that’s it. Wrap it up pretty and take your casserole or cookies over to your neighbors (you’ve been meaning to meet them, right?). Tell them it was baked with vegan love. Or, at least that you made it for them, and, by the way, it’s vegan.

Gary is calling this Neighborhood Vegan Food Sharing Week. NVFSW takes place June 18 to June 25. That’s this weekend. Gary also thinks it would be neat if you bought food to your office this week. Other than needing a snappier name (veganhood? Who Are the Vegans in Your Neighborhood?), this is super easy outreach for anyone who has a kitchen and fellow human beings nearby. You can “like” the Facebook page and share in the comments what you’re making for your neighbors or coworkers.

The next initiative is Gary’s too. He’s full of awesome ideas. And, I imagine, vegan cupcakes. For this one you don’t even have to leave your house, which is great for hermits like me. Gary is calling it “Veganizing, submitting, and commenting on recipes in non-vegan food sites”. The name. I know. But stick with me here.

This is just what you think it is. Become part of a large online food community (Gary suggests All Recipes, Mixing Bowl, or Taste of Home. But any food site should work.), write about recipes or comment on other’s recipes, and just be your awesome vegan self. I especially like this because I can pretend that all those hours I’ve spent on The Kitchn, Serious Eats, and Chow now count as vegan outreach instead of procrastination. Score!

This takes a little more finesse than you might expect at first. You can’t just vegan bomb these sites. You need to actually become a member of the community, read and interact with folks. Don’t make vegan spam, folks! Gary has set up a Facebook page for this as well, and you can also read a post he wrote about this on Our Hen House.

The final idea is the easiest of them all since someone else is going to do the work. The fabulous Gabrielle Pope and Panda Cookie are starting a blog about YOU. They want to highlight all the awesome vegan outreach and animal volunteerism of ordinary people in ordinary places. And their blog has a pretty great name, too: Vegans on the Move.


Our theory is that no action is too small. We want to know about the every day vegan on the street who is advocating for the animals, fostering community and putting out some positive goodwill to spread the vegan word. Do you host a vegan potluck every month in Columbus, OH? We want to know. We know that vegans come in all shapes and sizes and locations and we want to present evidence that we are everywhere and that even a small action is important.

This is more or less why I write for Lone Star Plate, so I’m down with this. I know lots of folks who write about vegan food in Houston or New Orleans, convince burrito shops to expand their vegan options, and plan bake sales at the drop of a hat, all great candidates for Vegans on the Move.

The Vegan Society of Peace bake sale raised $811 for VegFest Houston, Food for Life Global, and Kinship Circle. Way to go Houston! I haven’t heard back from San Antonio yet. Green, how’d y’all do?

In total, Worldwide Vegan Bake Sales in Texas raised nearly $5000 for seven charities. This is the most successful year yet!

UPDATE: Green sold 163 desserts and donated $1 from each dessert sale to SARA. News is their desserts were just voted 3rd best in all of San Antonio by San Antonio Current readers. Awesome!

There’s a fantastic write up of Worldwide Vegan Bake Sale in CNN’s Eatocracy today. Be sure to check out the slide show with great vegan recipes and photos.

In a recent blog post, Houston Press writer Christina Uticone reviews the vegan tamales made by Radical Eats, a vegan catering company whose mission is to “get fresh vegetables into your body.” Radical, huh?

Uticone tried the breakfast tamale, a tamale filled with vegan migas, and a spinach and corn tamale. Both look delicious, don’t they? I love the idea of a a breakfast tamale.
Radical Eats make five varieties of corn husk tamales and also banana leaf tamales, which I’m dying to try. Who wants to make a trip to Houston with me? The tamales are sold at local farmers markets and coffee shops (a full list of locations is on their website).
Radical Eats is also the upcoming host of the Houston Worldwide Vegan Bake Sale, which is raising money for Food for Life Global, Kinship Circle, and the first Houston VegFest. Am I the only one who would be excited to buy tamales at a bake sale? 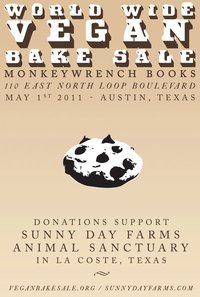 Austin is throwing a Worldwide Vegan Bake Sale to raise funds for these adorable animals at Sunny Day Farms Animal Sanctuary in LaCoste, Texas. The sale will be May 1, from noon to 6 PM at Monkey Wrench Books on North Loop, near Counter Culture. Thank you to the folks at Monkey Wrench for letting our community use the space. Monkey Wrench is a cooperatively run bookstore, and their animal rights and vegan cookbook sections have a lot of great books you won’t find anywhere else.

Austinites, we need your help! Sign up to bake something. Tell your friends, family, and coworkers about the bake sale. Send them photos of adorable mud-covered pigs and say you won’t stop until they are passed out in a sugary coma.

Sign up to attend or bake for the Austin sale on the Facebook page. There are now five Worldwide Vegan Bake Sales in Texas, in Austin, Dallas, El Paso, Houston, and San Antonio. Sign up to help at any of them, or start your own.