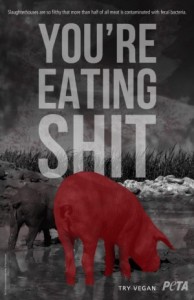 Texas Tech PETA ad. The small print at the top reads: Slaughterhouses are so filthy that more than half of all meat is contaminated with fecal bacteria

Congrats to four students at Texas Tech who recently won a PETA ad campaign. The ad, seen above, was completed as part of a Public and Social Service Design class. The ad is provocative, in the usual PETA style, without crossing the line into racism, sexism, sizism, or general deplorable insensitivity like many PETA ads. Well done, students!

The ad references the fact that the source of e.coli contamination in food is often animal manure in slaughter houses. This is the reason why meat must be cooked to certain safe temperatures and why ground meat–like hamburger meat–carries more contamination risk.

The students are not (yet) vegan themselves. I hope they check out the new animal rights group that’s forming at Texas Tech and learn more about how animals are treated in food production.