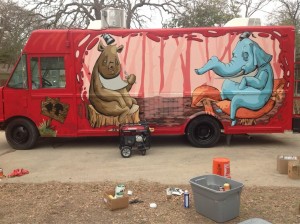 Shiitake Swerve, first announced in May 2012, is finally opening in Denton. This is, as far as I know, the only vegetarian restaurant in Denton aside from UNT’s vegan cafeteria Mean Greens. So this is a big effin’ deal.

Their menu focuses on, surprise!, mushrooms, which you can get either in sandwiches or tacos. All of the tacos are vegan and most of the sandwiches are as well. And everything can be ordered gluten-free, if that’s your thing.

And while we’re talking about Denton, a big shout out to Denton Vegan Cooperative which is still going strong at the Denton Community Market and area restaurants. They’re approaching their two year anniversary. www.dentonvegancoop.com Vegan enchiladas in the Metroplex. Photo by tofutti break. Licensed under creative commons

The folks at Dallas Vegan have been putting a lot of work into their website lately. They’ve added several new food guides, including this list of vegan Tex-Mex options in DFW. The list tells you the vegan status of beans, tortillas, rice, and sauces at restaurants. With that info, you can create just about any vegan Tex-Mex restaurant dish. The info is crowd sourced, so be sure to let Dallas Vegan know about your favorite Tex-Mex spot in the Metroplex.

So much is happening across Texas lately that it’s too much for one person to keep track of. I’m always looking to add more voices to Lone Star Plate. If you live in Houston, San Antonio, DFW, or elsewhere in Texas and would like to contribute to Lone Star Plate, send an email to lonestarplate (at) gmail (dot) com

In the meantime, grab a drink and catch up on all the latest in vegan food in Texas: