There’s a new San Antonio vegan blog called Veggie Angie. Angie just posted a terrific map of all the vegan-friendly restaurants in San Antonio. It’s incredibly thorough, with fifty-six restaurants currently listed. I’m pleased to add it to my list of Texas vegan restaurant guides. Besides the map, you’ll also find reviews of many of the restaurant on the blog.

Do you know of another Texas city guide I should add to my list? Let me know in the comments.

Hacienda on Henderson vegan brunch options from their Facebook page

In Arlington, the Loving Hut is changing format again. This time they’re scrapping their pasta/wraps/anything goes menu for vegan pizza. This makes two restaurants offering vegan pizza with cheese in Arlington (the other is Mellow Mushroom). The new menu debuts March 19. I can’t wait to see what toppings they’ll offer.

And in San Antonio, Green Vegetarian has moved their Flores St location to the Historic Pearl Brewery. The new location is in a much more visible and accessible area. Menu and prices remain the same.

In site news, Annemieke is the winner of the Vegan Bag of Tricks. Congrats! Let me know if these giveaways are something you want me to continue. Do you have plans for this weekend yet? If so, cancel them. Sunny Day Farms is having an Open Farm Day this Saturday from 11 AM to 3 PM. There will be story time, arts and crafts, and a scavenger hunt for the kids. Lunch will be provided by San Antonio’s all-vegan Vegeria, with proceeds benefitting the farm (i.e., bring cash). And of course, this is a great chance to meet the animals on the farm, like adorable Vladimir the Lamb above. You can RSVP on their Facebook page, though it’s not required to attend.

As always, I recommend donating to Sunny Day. It takes so much food and supplies to take care of these animals. They could use Tractor Supply gift cards, feed buckets, non-leather horse halters, lead ropes, and, of course, money. Have a rewards credit card? Use your rewards to get a gift certificate for Lowes or Home Depot for a painless donation.

A Texas stadium has made PETA’s list of veg-friendly NBA arenas. The AT&T Center where the San Antonio Spurs plays serves vegetarian burritos and tacos and a vegan apple turnover. If you pay the big bucks for premium seating, you can get vegan sloppy joes. For some reason, vegan sloppy joes are a popular option at NBA stadiums. They’re offered at six of the ten stadiums on PETA’s list. Green Vegetarian in San Antonio is throwing a block party for World Vegan Month on Sunday, September 30 from 3 PM to 7 PM. If you want to participate in either eating contest show up at 5 PM.

Besides watching people stuff their faces for the possibility of $100 gift certificate to Green and movie tickets, there will be music, drinks, kids’ activities, and a bake sale benefiting SARA.

We’re back with another round of Vegan Drinks!

ATX Vegan Drinks will be August 3 back at Cheer Up Charlie’s. As usual, grab a bit to eat from Cool Haus, Arlo’s, Me So Hungry, Via 313, or Fire & Soul. The spicy vegan corn dog I had at Fire & Soul last time was delicious, but I have my eye on a pizza this time. RSVP on Facebook.

San Antonio Vegan Drinks will be August 24 at 8:30 at Drink Cocktail Bar. Come by to meet vegan and veg-interested folks. San Antonio Vegans founder Shylah will be celebrating her birthday as well. Happy birthday, Shylah! Afterwards, join your fellow vegan drinkers for a bite to eat at TBD location. RSVP on Facebook.

Information for starting a Vegan Drinks in your city can be found at vegandrinks.org.

So I get this cartoon. Really. Texas is a wasteland of BBQ and chicken fried steak. Except it isn’t, exactly. Don’t get me wrong. You can drive along miles and miles of highway seeing signs advertising brisket and chicken fried chicken, and Texas isn’t exactly known for its fresh produce or vegetarian cuisine. But this cartoon always makes me a little wistful, because people who think like this are missing out on some great vegan pizza.

Here in Austin you can find vegan New York-style, deep dish, Detroit-style, Italian wood oven-baked, and French bread pizzas, among the many many options. That’s a lot of vegan pizza.

I have a few favorite vegan pizzas in Austin that didn’t make the Red Hot Vegans list. The Spicy Vegan at Brick Oven on 35th (not to be confused with Brick Oven) for some reason doesn’t get much love. Maybe because there’s no cheese on the pizza. But there’s chipotle pesto, which I think is even better. FYI you can also get the chipotle pesto on pasta (ask for no cream).

Sagra also makes some great vegan pizzas, and recently they started making pistachio cheese for their vegan pies. The pizzas are Italian-style, not the Italian-American pizzas which are the norm in the U.S., which means you get more creative vegetable toppings including arugula, truffle oil, and asparagus. Their menu changes seasonally. 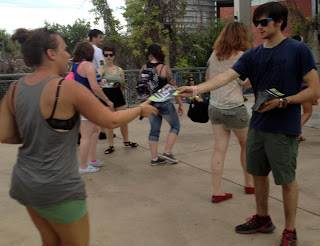 Mercy for Animals volunteers handing out leaflets at Warped Tour in San Antonio. Click through to the Vegan Outreach blog to see the expressions on people’s faces as they read.

I’m posting about May Vegan Drinks a bit earlier than usual since they’re all taking place early in the month.

Vegan Drinks San Antonio will meet at Drink Cocktail Bar again on May 1 from 7 to 9 PM. There’s free parking downtown on Tuesday evenings. RSVP on Facebook.

Dallas Vegan Drinks will feature a new location, Sundown at the Grenada. Join other DFW vegans on May 10 from 6:30 to 9:30 PM to have a few drinks and network. The folks at Sundown have made a big effort to create a vegan-friendly menu, so the food should be great.

Information for starting a Vegan Drinks in your city can be found at vegandrinks.org.