There are few things more satisfying in life than being asked your opinion. So grab a hot beverage and get ready to tell the world who has the best vegan food in Austin and Dallas. And then let the satifaction of being right roll over you. 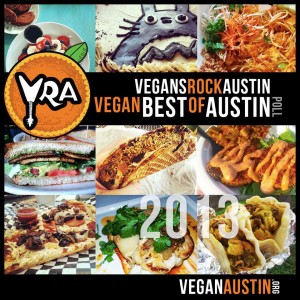 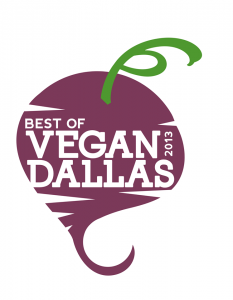 Dallas Vegan has launched their own Best of Vegan Dallas poll with eighteen categories. For someone who only visits Dallas occasionally, I think I need to adopt the voting ballot as my to do list! I’m especially excited about the Best Bar category. Voting ends Monday, December 2.

One thing I really like about both contests is that they include a really great mix of vegan and nonvegan businesses. I love when the vegan movers and shakers get credit, but I also love an opportunity to tell nonvegan restaurants that we noticed they’re offering awesome vegan options and we appreciate it!

The Vegetarian Society of El Paso also voted on a Best Vegetarian of El Paso recently. They were so quick that I missed my opportunity to tell you to go vote. They’re announcing the winners this week, so keep an eye on their Facebook page. Recently, PETA named Austin the most vegan-friendly city in the United States, beating out Portland, Los Angeles, New York, and Chicago. So why Austin?

The great thing the vegan community in Austin has going for it is momentum. I moved here at the very beginning of 2009. Austin was a pretty great city to be vegan in at the time, but the difference between today and four or five years ago is astounding. In 2009, Austin had just one vegan restaurant: Casa de Luz. Joining Casa, were seven or eight vegetarian restaurants. Austin was home to the Lone Star Vegetarian Chili Cook Off, two vegetarian meet up groups, and one vegan group (VRA). This is a healthy mix of options, but it leans pretty heavily towards vegetarian, and an older vegetarian scene at that.

The economy in 2009 was terrible, and it stayed that way for years. But the slow economy opened up space in Austin for food trailers. And there was an explosion of vegetarian, but more importantly, vegan food trailers.

Some of these trailers transitioned to brick and mortars. Toy Joy Ice Cream, Sweet Ritual, Beets Cafe, Austin Java Tarrytown, Maoz Falafel, and Counter Culture all opened as brick and mortars since the beginning of 2009. Altogether, that’s four or five new vegan or vegetarian restaurants opening most years. That’s a tremendous amount.

Austin has also been the home to a number of new packaged vegan food products, including Hearty Vegan Tempeh, Food for Lovers queso, Celeste’s Best cookie dough, Goodseed Burgers, Nacho Mom’s queso, Red Rabbit Bakery, and Baby Zach’s BBQ Hummus. You can buy their products in Austin stores, and in most cases, nationwide.

In 2009, Rip Esselstyn published The Engine 2 Diet, which quickly exploded into a national diet craze with books, classes, camps, and even food products. Today, the Engine 2 Diet Facebook page has 65,000 followers.

In 2011, a small group of people began planning Texas VegFest in order to showcase the great vegan offerings in Austin and expose them to a wider audience. Texas VegFest attracted 5,000 attendees in its second year and is quickly gaining a reputation as one of the best vegan festivals in the country. A sign announcing Vegan Drinks happy hour outside Cheer Up Charlie's. Photo by mollyjade and licensed under creative commons.

This is an extensive list, and it doesn’t even cover Austin’s all-vegan grocery store, vegan hot dog eating contests, supper clubs, vegan party barges, Trancegiving Thanksgiving potlucks, a vegan bar, bake sales that raise thousands of dollars, a no-kill city animal shelter. Read the past four years of this blog and you still wouldn’t be able to cover everything. And it’s all happened in less than five years.

So why is Austin the most vegan-friendly city in America? The people. It’s a small group of creative, dedicated people who go the crucial step beyond wondering “wouldn’t it be awesome if there were vegan…” and make it happen. The PETA award belongs to the people behind each of these businesses and events. Thanks for making it happen!

A Texas stadium has made PETA’s list of veg-friendly NBA arenas. The AT&T Center where the San Antonio Spurs plays serves vegetarian burritos and tacos and a vegan apple turnover. If you pay the big bucks for premium seating, you can get vegan sloppy joes. For some reason, vegan sloppy joes are a popular option at NBA stadiums. They’re offered at six of the ten stadiums on PETA’s list.