Brendan Brazier, famous vegan, Canadian Ultramarathon champion, and producer of a fantastic and fantastically expensive protein supplement will be at Wheastville Coop in Austin on Sunday, April 3 at 1 PM to talk about training and nutrition. Who wants to sneak into the back and ask him where he gets his protein?

This is a great year to be vegan at Austin’s South by Southwest. For those of you who know as little about music as I do, South by Southwest is a huge music festival. Huge. Hundreds of bands from all across the world will be in Austin from March 15 through March 20. And thousands of industry people and fans. Over the years, the festival has grown to include films, media presentations, and panels. For the week of the festival, Austin is dominated by all things music, film, and technology.

One of this year’s panels will feature Lone Star Plate’s own Lazy Smurf talking about vegan activism through blogging. She’ll be joined by Laura Beck from Vegansaurus. They’ll discuss how to spread the vegan message and create community through blogging. Monday, March 14, 3:30 PM, Austin Convention Center, Room 5ABC, 500 E. Cesar Chavez St.
The South by Southwest fun spills over into numerous outside events, including a Compassion Over Killing table with Vegetarian Starter Guides and Easy Vegan Recipe booklets at a to be announced music venue. What goes with vegan pamphlets better than vegan baked goods? The table will also feature a vegan bake sale. COK is still looking for volunteer bakers and people to table. Information about signing up can be found on COK’s website here. Saturday, March 19, noon to 6 PM. Venue TBA.
And finally, Lazy Smurf has the scoop on all the best places to get vegan eats near South by Southwest in her updated vegan guide to SXSW. Breakfast tacos (an Austin institution), food carts, Tex-Mex, late night dining, and the best grab-and-go options.

Vegan MoFo is almost upon us and I’m going to give it another go, so I thought I’d post to get back into the swing of things.

A lot of times, I make dishes but don’t post about them because they don’t really seem like recipes. This is pretty simple, and is almost more of a series of small techniques. Which I guess is what recipes are, hence, here’s a recipe!

I love asparagus, it tastes kind of like a delicate, more tender version of broccoli stalks to me. Recently, Newflower has been having it on sale, and I’ve been eating a ton of it. I love it sautéed, blanched, after it’s been dipped in tempura and wrapped in rice and nori, as sushi, and a hundred other ways, but my favorite way to prepare it is like this: 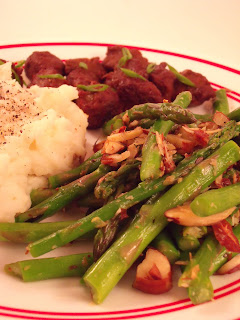 Directions
Prep your asparagus by breaking the ends. Take the tip in one hand and bottom end in the other, and gently bend, until asparagus stalk breaks. Discard the hard, white end. I like to cut my asparagus into 3 inch pieces for this dish, but you can leave it whole, or cut it into 2 inch pieces if you wish.

Zest the organic lemon, then juice it. Set both the juice and zest aside for now.

Carefully slice the almonds or hazelnuts into thin slivers.

Heat a medium sized cast iron skillet over medium high heat. Add olive oil and slivered nuts to pan and lightly toast. Once nuts have browned just a bit, add the asparagus and a pinch of salt to the pan and sauté until tender-crisp, about 2 minutes. Turn off heat and add a big pinch of zest and taste. Add lemon juice, lemon zest and sea salt to your taste.

Notes
You can buy almonds already slivered in stead of slicing them yourself, but they usually cost more.

I think the hazelnuts taste a little bit better, but I don’t always have them on hand.

I usually use 1–1 1/2 cups of asparagus, and the juice and zest of 1/2 a medium sized lemon, but depending on the rest of your meal, and your tastes, you can adjust it accordingly.

I hope that got you in the mood for some stellar vegan posts from tons of new and old vegans. There are already over 430 people signed up for Vegan MoFo 2010, from at least 15 countries.

Where Can a Vegan in Austin Go to Get Their Thanksgiving Grub On?
Cross posted from Vegan Vanguard

In Austin, there are many food-related events for vegans in the days leading up to, and including Thanksgiving Day.

Happy Vegan Baker
Eat Thanksgiving dinner in your own home without having to prepare a thing.
Complete 8-part meals prepared by Inge
Order by 5 pm on November 25, pick up or get it delivered(for a fee) on November 26.
Full meal is $28 per person, but dishes can be purchased separately.
Order via the website, phone 512-657-3934, or email inge@happyveganbaker.com

I know other cities are host to similar events, unfortunately, I don’t have any info about them.

Thanksgiving is almost upon us. For most people, this is a day of family, food, and hopefully, love and community–but for some vegans and vegetarians, especially new vegans or vegetarians and their families, Thanksgiving can be especially stressful. Here are some things I’ve picked up over the years:

If you’re around all of your family for the first time since making a huge lifestyle change, your family is bound to be curious. Some people handle their curiosity better than others, but be prepared to play 20 questions with each and every one of your relatives. I’ve experienced everything from family members who sneakily fed me dip loaded with bacon grease, to cousins who went out of their way to make sure I had something I would eat, to my immediate family who have always been supportive. I’ve had people try to serve me butter and eggs, or ask if chicken and fish are okay. I’ve even had family members assume my veganism was a result of my (Catholic) high school brainwashing me. Remember that when your family voices concerns, they do so because they love you. Gently inform them your beliefs, and, if they persist, agree to disagree. Remember, you’re not going to change everyone’s mind all at once, and getting in someone’s face, being beligerent, etc. only gives vegans a bad name while doing nothing to further the cause, and ultimately, Thanksgiving is a day for family, friends, and gratitude.

Nothing makes people understand veganism like amazing vegan food, so, if possible, take an amazing vegan dessert to share with everyone. If you can, help prepare the whole dinner. Not only is this great bonding time, but you can try to convert some of the dishes and make them vegan. This can be especially helpful for your hosts who want to accommodate you, but are unsure of what exactly is and isn’t in your diet. Some dishes can be easily converted, with no loss of flavor using everyday ingredients available at most stores, for example make vegan dressing/stuffing (use vegetable stock and bake in a dish instead of stuffing the turkey), or vegan mashed potatoes (use Earth Balance or olive oil instead of butter, and soy milk instead of milk). Make sure to pay special attention to the presentation of anything vegan you serve, because your food will be judged. I used to find it helpful to wait until after people had started eating and enjoying a dish before mentioning that it was vegan–although now everyone I know is well aware that I’m vegan.

If you know nothing will be vegan, or are unsure if there will be anything for you to eat, eat ahead of time and/or take a dish you love, to share with others. This is a good general tip for vegans at any event, and it makes any food you find that’s accidentally vegan, a happy surprise!

Instead of obsessing about food, relax and enjoy the company. This a good general tip for everyone. In my experience, it does the most to promote veganism because it shows that vegans can be well-adjusted and social, and that veganism can be easy and fun. In college, both of my roommates became vegetarians after living with me, and they each said something along the lines of, “You showed me it didn’t have to be hard (to give up meat)”.

On the flip side, don’t act like a vegan martyr. By that, I mean the modern common usage of martyr, i.e. someone who is constantly suffering. Being a vegan is a choice made freely, and it’s something to be happy about. If you feel deprived or angry about it, you’re doing it wrong. Additionally, no one wants to hang out with someone who is down about everything. One of my best (omni) friends, J, met a cute vegan girl, and wanted to take her out, but they couldn’t get their schedules to align until one night when J was going out to a steakhouse with his friends for a birthday party. The girl repeatedly said she didn’t mind going to the steakhouse, and they wanted to hang out with each other sooner rather than later, so the plans were set. As soon as they stepped inside of the steakhouse, the girl loudly declared, “It smells like death in here,” and proceeded to make snide comments all evening. Did anyone have a good time that night? Of course not. I’m not saying you should stay mum if you’re uncomfortable, but I know I would like to eat without having to defend my choices, and I’m sure my dining companions feels the same way. Since we respect each other, even if we disagree, we can enjoy spending time together.

Up next: Guide to a Vegan Vanguard Thanksgiving, Part 2 – What Do I Eat, Now That Turkey’s Off The Menu?